“Alberta! You cheat us! But you will not defeat us!”

Over a hundred parents, educators and other public school supporters from Milwaukee shouted this chant and others yesterday as they delivered a petition with more than 5500 signatures opposing Senator Alberta Darling’s public school takeover plan.

The crowd gathered to deliver the petitions in front of Senator Darling’s Menomonee Falls office, chanting, waving to passing cars, and distributing flyers that asked, “Menomonee Falls residents: Do you want the Milwaukee County Executive to run your schools?”

Jennifer Epps-Addison, a resident of Menomonee Falls who serves as executive director of Wisconsin Jobs Now and is also an MPS parent and graduate, told the crowd: “We came here to Senator Darling’s Menomonee Falls office because this is the last place we’ve seen her anywhere near Milwaukee.” Epps-Addison continued, “We have a plan to improve our schools and to support our students and rather than privatizing our kids’ education, we want Senator Alberta Darling and Representative Dale Kooyenga to support the parent-driven plan to improve our communities.” 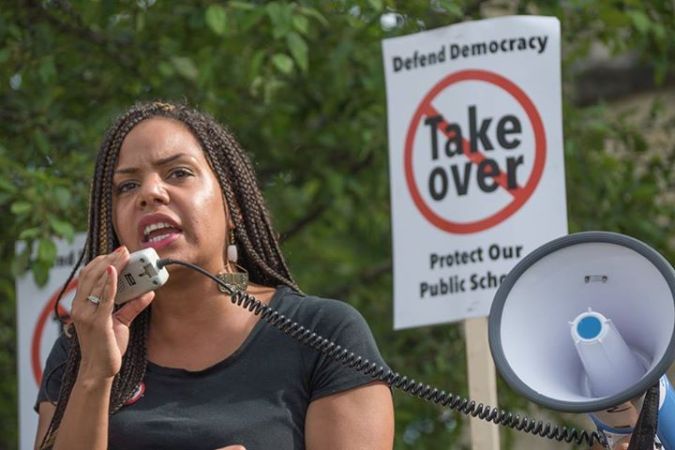 Mike Wilder of the African American Round Table said: “We are ready to fight back against Senator Alberta Darling and her allies’ plans to privatize – cause let’s just be clear. The end goal here is to privatize the entire system in Milwaukee, handing over a civil right – public education is a civil right – handing that over to private companies and corporations.”

An employee of the Menomonee Falls Chamber of Commerce said Darling’s sign had been recently removed from the building. A typewritten sign on the front door said the office was closing at 3 p.m. for off-site meetings.

Can You Hear Milwaukee Now?! from MTEA Union on Vimeo.